I was introduced to the Mutabilis eleven years ago when the man who designed our garden planted a rose beside a grey corokia hedge beyond my kitchen window. He thought this plant might satisfy my wish for the roses and herbaceous flowers that flourish in the colder climate of the city of Christchurch where I grew up but are unsuited to the temperate subtropical climate of Auckland in the North Island. He extolled this particular specimen’s virtues remarking on its hardiness and promised me that it would flourish alongside the native corokia, coprosmas and the pale grey euphorbia ‘Silver Swan’ that grace this corner of the garden. And it has. 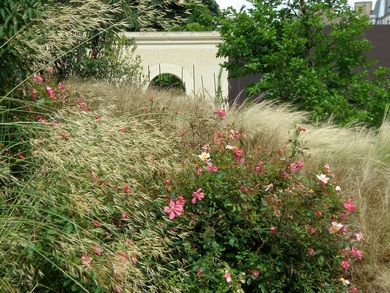 Some years later I saw the Mutabilis in quite a different setting at the Musée du quai Branly in Paris and there I really began to perceive its magic. It had been planted en masse amidst a sea of tall barley-coloured grasses in a scheme that was truly breathtaking. Inspired, I returned home and added another two plants to the garden up near the house and two more down in the valley close to a dry streambed. Then I stood back and watched them grow. In the meantime I had arranged a date for an operation to fix a constant maddening pain in my sciatic nerve. The operation was supposed to help but instead it revved up the condition turning it into a harsher and wilder kind of pain. Immobilised now and confined to my home, I began writing about the world on my doorstep, about the garden and the creatures that live here and my two cats that keep me company. That was when my observations of the Mutabilis and her revolving colour show entered the frame.

The Mutabilis and the cover design

As the publisher Dr Linda Cassells was reading through my manuscript she remarked upon the entries that featured the Mutabilis rose and how they threaded like a leitmotif through the journal. She wondered whether we might incorporate an image of the rose in the cover design. This is one of the more satisfying aspects of book production where other minds engage with your work and perceive its possibilities. So on a sunny morning in early winter the publisher and cover designer, Jacinda Torrance, met in my home for a briefing meeting over morning tea. The publisher brought a selection of books for discussion, spreading them across the dining table so that together we could study the varying elements and components of a design and begin to determine the direction for this book cover. Earlier the designer had been supplied with a photo of my Mutabilis rose. On this day we considered that photo and also the flower paintings of Georgia O’Keeffe, and of the New Zealand artist Rita Angus. Then I asked the designer, ‘Do you draw?’ And she replied that she liked to make ‘pen and ink drawings of common weeds and herbs'. Had she considered a drawing of the Mutabilis? She opened her sketchbook and there on parchment, light and ethereal, was a cloud of Mutabilis roses, like butterflies fluttering across her double-page spread. ‘But that’s it,’ I exclaimed. ‘You could wrap those drawings around the journal and you would have a cover.’ Later we went into the garden and Jacinda pointed out the exquisite crinkly edges of the rose petals in the wondrous act of unfolding. Together we selected a series of buds and flowers and I snipped the stems, tied up the bunch and gave them to Jacinda to use as living specimens for further drawings.

In her ink drawings Jacinda has captured the converse qualities of this valiant little rose, in turn beautiful, ephemeral and strong, the crinkled edges hinting at the possibility of transformation through the creative process but also suggestive of crumpled and tattered shapes buffeted by harsh winds. These fragile roses encapsulate a theme in my book of persistence and keeping on through difficulty while holding on always to hope. Through hope, faith and courage it is possible to prevail.

Extract from Giving Yourself to Life: A Journal of Pain, Hope and Renwal

There are dozens of buds on the ‘Mutabilis’ rose, their hot orange petals peeking out from inside a calyx of green protective sepals, awaiting the touch of the sun and their brilliant moment to unfurl. It is good to stop and study Nature. I have been admiring this rose in the distance for a long time, observing the effect when light catches on the colours, showing off the orange, the apricot, the faded pink and the cerise. I have also been picking stems for the house and enjoying their soft petals through the day and in the candlelight, but up until now I had not taken the time to really study the rosebush itself in close-up.

Today I was surprised to discover even more stages of a life cycle the plant — in the spent bronze bronze flower heads, shaped like small coronets, in the pale orange rosehips, and in the burgundy stems and leaves of new growth. You could say this rose incorporates a life passage like Shakespeare’s seven stages of ‘man’ — although his was a masculine definition of life. I would prefer to personalise the stages and think instead of the infant, the school child, the lover, the mother, the writer, the elder and finally a person facing death.

Mutabilis in Latin means ‘changeable’, ‘inconstant’, but it also means ‘mutable’. To be mutable implies ‘being capable of, or tending to, change in form or quality or nature’. Sometimes you don’t see something obvious in your midst, and then one day the meaning arrives. This lovely rose symbolises the very thing I have been working towards all year, searching for the capacity within to adapt to my circumstances. I think if I can try to live in the style of the rose, with poise and beauty, faith and confidence, moving effortlessly from one stage to the next, knowing that each stage flows on as surely as day follows night, and as birth follows death, I think I will be okay. 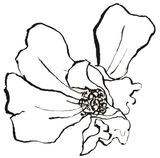